cancel confirm NSFW Votes: (0 votes)
Are you the publisher? Claim or contact us about this channel.
0
Showing article 1 of 65 in channel 6752016
Channel Details:
Viewing all articles
Browse latest Browse all 65
0
0
Thanks to the bizarre mechanics of the Spanish Football Federation, Levante Unión Deportiva has been able to buy a place for its Reserve side in Segunda B for the 2012-13 season. This type of trade-off has become a regular feature of the post-season in recent years, as more and more clubs have been demoted for failing to pay their players wages by the end of season deadline. Levante UD B, as the reserves are nattily titled, do have some pedigree in Segunda B however, having played in the third tier for four seasons from 2003-04.
Founded in 1962 as Atlético Levante, home was the Campo de Vallejo, which was shared with the first team. Promotion to the Tercera was secured in 1964 where they played for the next 5 seasons, before dropping in the regional leagues for three decades. By the time the reserves  re-emerged as Levante B in 1999, Levante as a club was beginning to wake from its slumber and the first team had began to establish itself in the second division. Work started in September 2002 on a new training facility 25 miles west of Valencia, near the town of Buñol. You will know of Buñol, not because of its footballing pedigree, but for La Tomatina, the festival where 40,000 people throw ripe tomatoes at each other. Anyhow, Levante's Ciudad Deportiva opened on 26 June 2003 and a year later, the B team had won promotion to Segunda B thanks to play-off victories over Santa Eulalia and Hospitalet.
The reserves didn't stop there, finishing third in 2004-05, but they were prevented from entering the Play-offs as the first team were in the Second Division. A year later, and runners-up spot in Group III of Segunda B was achieved, and as the first team had gained promotion to La Primera, the reserves were allowed to play-off for promotion. There would be no double celebration however, as Vecindario edge them out over two legs. Levante B dropped back to the Tercera in 2008 and it appeared that any chance of promotion back to the third tier in 2012 had passed them by after losing in this seasons play-offs to San Fernando CD. However, the demotion of CD Denia and the purchasing of the vacancy in Group III for 190.000€ will see Levante B back in Segunda B after a four year absence.
The Ciudad Deportiva is a fairly typical out-of-town sports city and training complex that many of Spain's top flight clubs now own. The main arena features a basic covered stand on the west side, no more than 15 metres long, and terracing. With hard standing around the remaining sides, it holds 1,000, more than adequate for the few hundred supporters their matches attract. Should any of their matches attract a large travelling support, then fixtures could be switched to the Estadio Cuidad de Valencia or the nearby Campo Beltran Baguena, the home of CD Buñol. 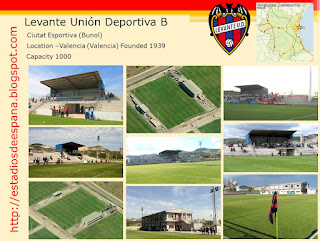